A pain pump is the more common name for patient-controlled analgesia (PCA). It is surgically implanted into your lower abdomen, and pushes a set amount of pain killers directly into your cerebrospinal fluid. Because the pain medication enters the fluid around the spinal cord directly, patients usually need a lesser amount of medication than they would if taking a pill or a liquid drug.

The manufacturing company Medtronic released a pain pump called the SynchroMed II. Since its release in 1996, it has been linked to the death of 14 people. The problems with the SynchroMed II are so serious that the FDA has issued a Class I Recall, its strictest sanction. 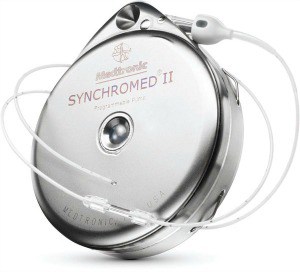 What are the problems associated with this pain pump?

There are four major issues with the SynchroMed II:

Medtronic has received serious warning letters from the FDA. Each of these problems leaves patients at risk of a deadly overdose, and the corrosion of the motor could lead to an infection if any of the pieces make it into the bloodstream or cerebrospinal fluid.

Why Medtronics may be responsible

The SynchroMed II may have caused the death of 14 people, and yet Medtronics still claims there is nothing wrong with their product. Instead, they claim that tweaks to the design are sufficient to fix the issue. The also claim that 94% of their clients experience no issues with the pain pumps after six years; it can be assumed, then, that the cost of recalling the devices will be higher than the cost of the lawsuits for the 6% of patients who do experience problems. Plaxen & Adler does not believe in profits above patients. Let’s return to a medical system that values safety over profits.

If you have questions about the Medtronic SynchroMed II pain pump, please visit Plaxen & Adler, P.A.