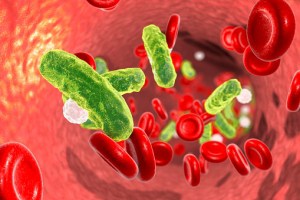 Modern medicine is far less likely to kill you than ever. Operating techniques are constantly being refined, technology has made keyhole surgery a reality, and new drugs and sterilization techniques have helped to reduce the risk of infection in medical facilities everywhere. However, all that progress comes at a price; antibiotic resistant bacteria are making it harder to treat infections when they do occur, and healthcare-associated infections (HAI’s) are becoming more common and more deadly than ever.

The Sepsis Alliance tells us, “Sometimes called blood poisoning, sepsis is the body’s often deadly response to infection or injury. Sepsis kills and disables millions and requires early suspicion and rapid treatment for survival. Once sepsis sets in, if left untreated, it can progress to septic shock and death. Worldwide, one-third of people who develop sepsis die. Many who do survive are left with life-changing effects, such as post-traumatic stress disorder (PTSD), chronic pain and fatigue, and organ dysfunction (don’t work properly) and/or amputations.”

Sepsis occurs after an infection spreads to the blood stream. The initial infection can be from an untreated wound, but it is far more likely to develop after surgery. According to the National Institutes of Health, the incidence of sepsis after surgery has “increased significantly” over the last 17 years, despite advances in sterilization and surgical techniques. Sepsis is more likely to occur after non-elective surgery, particularly abdominal surgery because of the high risk of bowel perforation.

When a patient undergoes abdominal surgery, medical care providers should be on the lookout for the signs and symptoms of sepsis. For a diagnosis, a patient should have a known or suspected infection and two of the following symptoms:

Quick treatment is a matter of life or death

Treating sepsis quickly is vital; the longer the condition is left untreated, the more likely it is to be fatal. Unfortunately, sepsis also moves quickly; a missed diagnosis of sepsis after surgery is likely to be fatal, so it pays to know the signs, symptoms, and risks.

A postoperative sepsis diagnosis doesn’t necessarily give rise to a medical malpractice case, but if your loved one suffered severe sepsis from a missed or delayed diagnosis, you may be entitled to compensation for medical bills, lost wages and other damages. Let us investigate the case for you. The experienced Maryland medical malpractice lawyers at Plaxen & Adler, P.A. can evaluate your case and help get you the compensation you deserve. Call 410.988.4449 or contact us today for a free consultation.